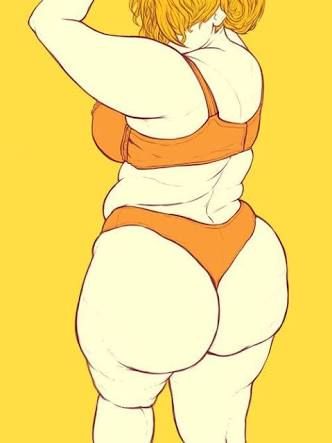 On Sunday I read the news that obese NHS patients will not get non-urgent surgery until they lose weight.

It made me want to cry. I’m a recovered anorexic who is very active and eats a varied and balanced diet and because of that I am both fit and healthy. I also happen to fall into the “obese” BMI category. In order to lose weight I would have to restrict my food and exercise to the extreme, leaving me both hungry and exhausted; pushing my body below the weight that it sits naturally at. This is unhealthy, and it would mean that my physical and mental health would be in decline. I would also end up spiralling back down into a very dark and dangerous place, with even more devastating and continual effects to my physical and mental health. If I required non-urgent surgery, I would therefore have to force my body into a place where it is not at its healthiest, experience distressing physical symptoms, and in the process would be triggered into a life-threatening mental illness that could leave my physical health in such a bad way that it could kill me – if the torture of living with an active and consuming eating disorder didn’t tempt me to end my life first. In short, I would be put in a life-threatening situation in order to get non-urgent surgery. For me, it wouldn’t be worth the risk.

BMI is bullshit. All health professionals know this. And if they don’t, then they should: there’s been so much indisputable evidence that shows us that using a basic BMI chart to tell us whether we are healthy or not is ridiculously primitive, simplistic, and inaccurate. To think that I might not have access to the same healthcare as someone thinner than me after working so incredibly hard to get to this healthy and happy point in my life both physically and mentally makes me feel sick.

We all have individual natural and healthy weight ranges that our bodies choose and we maintain when we have a healthy lifestyle. We don’t get to choose that weight. No one else gets to choose that weight. Our bodies determine it. And those people who don’t fit into the “socially ideal” weight category (that literally wasn’t EVER intended as a way to measure health) get punished for it (whilst those who push the “obesity epidemic” and reinforce the stigma and myths around “obesity” profit from it). There is so much overwhelming evidence that it is possible to be healthy at most weights, shapes, or sizes (depending on yourself as an individual and what your own personal healthy weight is), and it is nauseating to think that people will be forced to make a choice that could cause them both physical and mental distress.

Even regardless of health, “singling out patients in this way goes against the principles of the NHS,” says Mr Ian Eardley, senior vice-president at the Royal College of Surgeons in The Independent.

Patients with a Body Mass Index (BMI) of over 40 will not be referred for routine surgery unless they are able to reduce it to under that number over a nine-month period.

Alternatively they will be required to shed 15 per cent of their weight, according NHS Herts Valley Clinical Commissioning Group (CCG) and NHS East and North Hertfordshire CCG.

Whichever achieves the greater weight loss will then allow them to be considered for surgery.

Patients with a BMI over 30 but under 40 will also be required to reduce that figure to under 30 or lose 10 per cent of their weight before they are considered for surgery.

This decision is yet another discriminatory act against people in larger bodies in the UK, and I’m so tired of it. I’m tired of being told everywhere I look that my body is “wrong”. I’m tired of watching my category of bodies represented by images of men and women with protruding stomachs and their heads cut out of the shots as if they are nothing but  their size (for example right now I typed in “obese patients will not get non-urgent surgery until they lose weight” into Google and the majority of the images are fat people with their heads chopped off – seriously, I’m so done). I’m tired of things like having a “World Obesity day” following the National Mental Health day – which if it wasn’t so revoltingly ironic, would be laughable, without even addressing the fact that there is literally a day to tell us all how bad and unhealthy our bodies are if we are over a BMI of 30.

Despite that, I’m someone who exists in a body that is fairly “average”. Even as an “obese” person, I have an amount of thin privilege. I can fit into clothing at regular stores. My friends laugh as if it is absurd when I say that my body fits into the “obese” category. My booty is the UK’s “average” size (although this booty is anything but average, just saying), and my top half is below the UK’s “average” size (and just so you know the average clothing size for women in the UK is a size 16, which is a US size 12, and in the U.S. the average size is between a 12-14, which is a UK size 16-18). I have only had one health professional (physiotherapist) mention my weight in a negative way (AFTER I had told him all about my previous experience with an eating disorder and described to him my active lifestyle and balanced diet. And boy, did he receive an educational six-page feedback letter on eating disorders and health at every size? Yes he most certainly did). The discrimination that I face is significantly less than those who live in bigger bodies than I do, and it can have devastating effects on mental health.

I don’t want to be fighting to be seen as equal to other people because of my BMI. I don’t want to fight for those bigger and smaller than me to be treated the same. I don’t want to fight to get rid of negative associations with certain body sizes. I just want it to BE like that. Right now. I will, of course, keep fighting this fight, but man, am I exhausted of having to argue with at least one person every time I say that to be obese is okay and that someone who is obese can be just as healthy as someone who is not. And now we have our healthcare to fight for, too.

Hopefully, one day, we will all be at peace with our own bodies, and each other’s, and regardless of our weight, shape, or size, we will be treated equally and our health considered individually. Until then, let’s keep being angry, let’s keep speaking up, let’s keep pointing out the evidence, and let’s never give up.

This article was originally published on my eating disorder and dieting recovery website here.