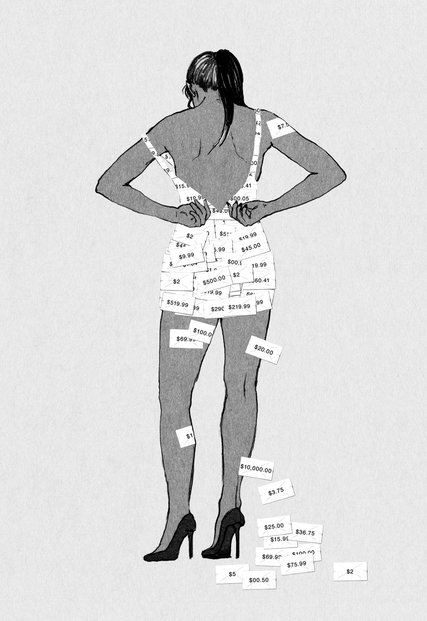 I was conversing with my boyfriend last night when a joke was made about sleeping with men for money. The topic quickly became a debate about sex workers and whether feminism should support it or not. My boyfriend was saying that using your sexuality to get money is not feminist, nor is selling yourself as an object. I had previously been in two minds about this topic, not quite understanding why feminism should support sex work but also being aware that I was probably missing something. However, I started arguing against him because he was attacking the sex workers rather than the men paying for sex, and that got my hackles up. I wanted him to be wrong. And in taking a stand against his point of view, I ended up not only convincing him that feminism should support sex workers, but convincing myself.

Firstly, let me make an analogy. Body hair is a feminist issue. Feminism talks about how the pressure to remove our body hair as women has come from an oppressive and patriarchal view on what femininity is and what women should look like. Feminism fights for body hair on women to be normalised and not shamed, so that shaving or waxing becomes something that feels like a choice, rather than a prerequisite. Personally I shave my armpits because I want to. I don’t judge anyone who does not, because I think it is the decision of the person owning the body who gets to decide what to do with it. I shave my armpits because I prefer the aesthetic (and that is probably influenced by our society but that’s beside the point I’m making). However, I would like to know that it would be okay for me not to should I change my mind. I should like to be able to make that choice completely stigma free, without any negative backlash from either men or women. The same goes for sex work. Sex work has been stigmatised in many ways. Either all sex workers are portrayed as victims, or they are portrayed as dirty, cheap whores. The sex industry is marred primarily by men, who have cashed in on other men’s desire for sex with women, and have committed terrible crimes and abuses predominantly against girls and women (although boys and men can also be victims of these crimes). Yet there are also women who choose to work in this industry. These people have a choice to do what they want with their bodies, and for that choice to be accepted, and respected.

“But they are selling themselves as objects, which contributes to the objectification of women!” I hear you cry. Yeah but no. Sex workers sell sex as a service. Sex with themselves. As people. It is not the women who choose to objectify their own bodies but the men who pay to have sex with them. This does not have to be the case. You can pay to have sex with someone and still see them as a human being. It is the man who turns her into an object; who disregards that she is a complex being with a life and relationships; passions; hobbies; interests; opinions; thoughts and ideas; likes and dislikes. A woman’s naked body is an aesthetically pleasing, alluring, and arousing view for straight men, but at no point does she stop being a woman. You can pay for sex with someone and still respect them, just as you would (hopefully) if you were not paying for it. If respect and dignity are part of the transaction, then it becomes about simply paying for something which feels good. This might be an idea that not everyone is comfortable with, but if both parties are consenting adults, then it really is no one’s business but theirs – literally. The issue here is not sex as a service but the way women in the sex industry are treated. Selling sex only becomes crude, dirty, and distasteful when the men paying for sex and others involved in running the sex industry cast a misogynistic view on sex workers and treat them with contempt and disdain. If everyone involved treats the interactions with respect then it becomes an enjoyable paid service that both people can receive pleasure and benefit from – which is part of loving your job.

People ideally want to work in a job they love. People who especially love animals often choose to work with animals so that they can earn money from doing what they love. Some people love working with people, or computers. Some people love music or art or writing, and so choose a career where they can do these things that they love and earn money from it. If someone loves sex, and loves sex with a variety of people, why not make money from it? Or maybe they just see it as a job that they can do well and aren’t bothered about doing it? Why is that not okay?

What needs to happen is a complete overhaul of the sex industry, so that it becomes a far more woman-friendly, woman-driven industry in which women are treated with – yup, you guessed it – respect and dignity, rather than as rag dolls with holes. This is a feminist issue because it ties to the bigger picture: equality. The sex workers are not the issue in this industry, and so they should be supported by feminists. It is the industry, and the world as a whole, that needs to change.

(This article is written about women who willingly choose to work in the sex industry and does not include any people who are trafficked or forced into the industry against their will or because they have no other means of earning money, although obviously these people also deserve to be treated with respect and dignity)

I'm here to remind you that you do not need to feel guilty for eating whatever you ate this Christmas, and for resting however much this Christmas. For always, but especially now, as thos time of year can be a super hard time for those with eating disorders or disordered eating. It is okay to eat all of the Christmas food. It is okay to rest up. It is okay to enjoy yourself. Without guilt, without self-loathing, without self-punishment. Food is not bad. Rest is not bad. You are not bad. You don't have to go on some weird New Year's diet. You never have to to on a diet. They don't work, they are bad for you mentally and physically, and your body is not here to be punished. Neither are you. Make this the year you are kind to yourself. Give yourself a big ol' hug. ❤
I never thought I'd be where I am now.
Here are low quality photos that no one asked for of me reaching peak comfort levels after buying some winter clothes. The highlight has to be the wearable blanket because what absolute genius read my mind about having a blanket that I can constantly have on me for all of winter that envelopes me entirely?!
When you've got an "invisible" illness, you don't have any obvious signs that your body is unwell. You look like everyone else. You don't have bruises or gashes or broken bones. You can't really walk around talking about how bad you feel 24/7, so you mask it. If you feel bad, you either carry on as normal or you rest at home where people can't see you. There are subtle signs but most people don't know to look for them.
How is everyone feeling about covid these days?
Can't believe there are people out there who genuinely believe that fat people aren't sexy. We are fire.
We live in a world where many of us are trying to be thinner all the time. And ironically, it is the thing that's making us fatter: the biggest predictor of ob*sity is dieting (or restriction in general so obviously this includes eating disorders). Every time we restrict our bodies it can shift up our set point in order to protect us from another "famine". It can make the body more likely to store fat rather than burn it, and that's just our bodies doing its best to protect us. It's doing its best to keep us alive.
⚠️ Fat people are sexy.
I'm going to level with you: the last few weeks have been HARD. I got a chest infection, spent 10 days packing up our old flat, moving house, and unpacking at the other side, and other moving house jobs. I found out that my abusive ex has moved from 5000 miles from me to within 10 miles of me. I had to completely distance myself from a friend and had a fight with another. I'm also in the middle of something stressful and unpleasant that I can't talk about on here yet.
%d bloggers like this: