On Monday the plumber and his apprentice came and identified the leak in the floor and fixed it, as well as insulating our pipes. I am so relieved that they managed to sort it out. Now all we have to do is wait for it to dry, which could take a long time, but at least the cause of the issue has been resolved.

I created an activity schedule for Josh and I whilst we are otherwise unable to do any other movement than sitting on our butts on the sofa. Mostly it is for Josh because otherwise without a structure he would not do any movement at all, and we need to keep as healthy as feasible in a situation where we can’t move about as much as we normally would. Josh doesn’t do a huge amount of movement anyway, so it is super important for him to get some in. Remember though, if you are recovering from an eating disorder, REST IS IMPORTANT. My thoughts on myself and Josh are coming from a place of people who can manage exercise in a healthy, balanced way, and who have bodies that are not damaged from restriction. For those recovering, rest is crucial and necessary. 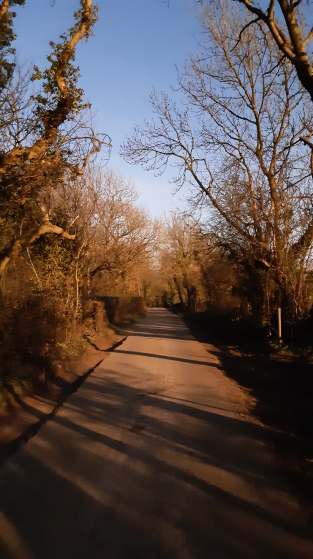 On Tuesday, we did yoga together, which was actually really good. I only do light yoga for movement and stretching and flexibility. Let’s say that flexibility isn’t Josh’s strong point, so he was struggling a LOT with even the basic moves, but he said it really helped his back pain (he has arthritis in his spine). The day was really sunny which lifted our mood, and I kept off social media for the most part, which helped with my anxiety. As the sun started to set, we drove up to a view point and walked in the last of the sun (photos above and below). It felt so good just to be out in the fresh air, and even though there is so much to be anxious about right now, it felt peaceful. There weren’t many people about and we were all very far apart from each other, and everything was quiet apart from the birdsong. 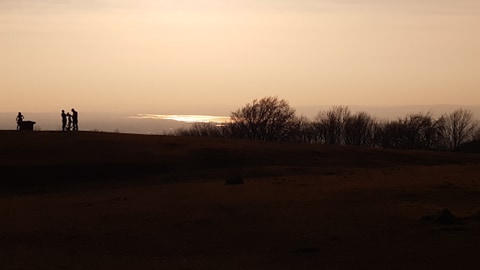 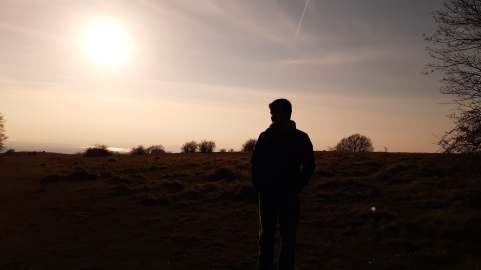 When we were home we rested then made some dinner and squabbled over what film to watch. Eventually we settled on Klaus, which is a wholesome, heartwarming animation for anyone looking for some light relief and easy-going watching. 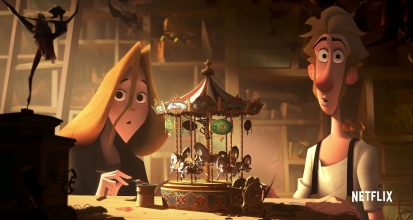 Wednesday I got up, had some breakfast, and did a low impact cardio video, but taking it slow so I don’t overdo it and cause a flare up. Josh slept badly so didn’t join me

Josh and I talked about work and decided that even if I have to take unpaid leave that it is not worth risking the complications that could occur from either myself or him catching the coronavirus. The ME Association states that “People with underlying health conditions that make them more vulnerable to the lung complications of this virus (which may or may not be the case with ME/CFS – at this stage we just don’t know), or have a condition like ME/CFS where an infection such as this will almost certainly cause a relapse, or significant exacerbation of symptoms, need to be doing everything they can to protect themselves, and to socially distance themselves from other people.” With ME/CFS there is evidence to suggest that I am more likely to catch it, and to suffer complications both during and after the virus (assuming I survived!). Having asthma (that is flaring as well) means that I am doubly at risk. This is a situation none of us could have predicted and making decisions is hard when you are trying not to be too fearful but at the same time ensuring that you don’t underestimate the virus and don’t carefully consider the risks to yourself and then do whatever seems reasonable to mitigate them. We will struggle financially on one income as our outgoings are slightly more than Josh’s income and that’s without buying literally anything other than rent, bills, and food. But it’s something that we have to do that in order to protect ourselves, and we’ll just about make it work. There are so many difficult decisions to make at this time. I am trying to stay away from social media too because there are so many terrifying posts being made and it just becomes completely overwhelming.

But back to being positive! Here’s a drawing I made of myself on Instagram using a template as shown below:

This morning was stressful, but I have now clarified that I will be taking unpaid sick pay with my boss and he has said he will support me to do this. I spent the day pottering about, cutting Josh’s hair (it didn’t actually go too badly!), and then Josh and I went for a stroll in the last of the sunshine. In the evening we watched Black Panther, which is a pretty good film if you haven’t already seen it, although I’m not sure about the rhinos…